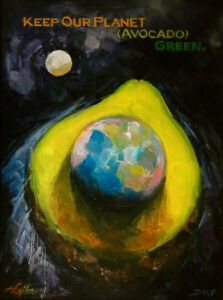 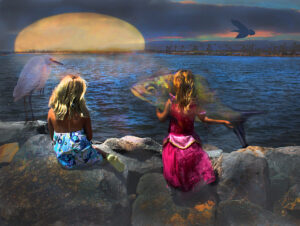 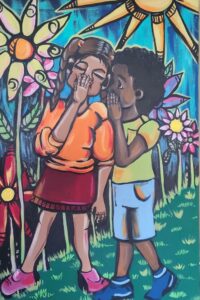 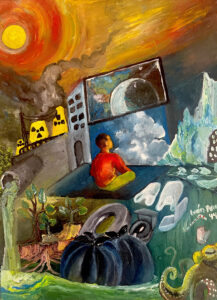 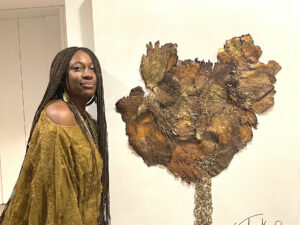 “Mother Earth: Fragile Planet” in the Community Room, was prompted by the 52nd anniversary of Earth Day, April 22 and Arbor Day, April 29.    The exhibit is free and open to everyone and  runs through April 29. The library is  open from 10am to 4pm weekdays.

The art show expresses hope and compassion for our planet despite the fear of climate change,  and is a tribute to Larry Miller, who curated the original exhibition with Kira Carrillo Corser.  Larry Miller was the Friends of the Fallbrook Library Fine Art Director from 2011 to 2015, staying with the team after his tenure to help with future shows. He was a respected educator and scientist living in Fallbrook. Kira Carrillo Corser, director of Compassionate Arts, Inc., now brings this exhibition back to the library. This exhibition is the first of a two year plan by Compassionate Arts to include artists and educators in climate conversions to build resilience, compassion and knowledge.

The 17 artists  have chosen to express their climate concerns in their paintings, sculpture and words:

Heather Hilliard –Bonds writes “creating an environment through planting and gardening creates a home and safe haven for the animals around us” and illustrates this in her painting “You Are My Sunshine”. The title of a diptych “Solastalgia” by Katy Parks-Wilson describes a form of emotional or existential distress caused by environmental change. The feeling of longing, rage, anxiety, melancholy triggered by the loss of nature. Leslie Sweetland’s paintings show the effects of “Before Man: After Man. In “Lupine Meadow” a place of serenity when she first painted it, had become an industrial park later which she documents in “Progress?”